Ken Shigley took over as the 49th President of the State Bar of Georgia and made his oping address at the meeting on June 4, 2011. Drawing on his broad experience as a former small town sole practitioner as well as his experience as a prosecutor, insurance defense lawyer and trial lawyer, Ken is looking toward the future of the Courts and the place that the Bar will have. He is establishing a commission on the future of the courts and wants to insitite a Federal style electric filing system in all 159 counties in Georgia. He also is dedicated to the small practicing lawyer and is establishing a committee on "Main Street" lawyers.

At the meeting, the Board approved a budget that cuts expenses of the State Bar by $4.00 per member following the $2.00 per member dues increase. The State bar will be further looking to cut expenses, to include the huge sums it pays in postage. The Board also elected four members to the at large seats on the Executive Committee. They are David Lipscomb for Lawrenceville, Bob Kauffman from Douglasville and Brian "Buck" Rogers from Atlanta. Rita Sheffey from Atlanta was elected to fill the unexpired term of Patrice Perkins Hooker who was elected Secretary

Posted by Eric A. Ballinger at 9:08 AM No comments:

The member benefits committee met on June 3, 2011 at the Annual Meeting of the State Bar of Georgia. On the agenda was a report from BPC Financial as the recommended insurance provider, a review of the Law Practice Management and a proposal for self-insurance from Qual-Care.

BPC Financial, the Jacksonville, Florida firm that the Bar approved as the recommended agent, gave the report as to their activities. presently they are advertising heavily and are a Five Gavel sponsor of the State Bar. As of this date, they have signed 311 policies for Bar members since 2009. While this seems like a low number, BPC indicated that based on their experience with the Florida Bar, slow steady growth is part of the pattern, especially at the outset. The committee authorized BPC to make a Request for Proposal with insurance providers to offer better packages for Georgia Bar members through BPC as the recommended provider.

Natalie Kelly from the Law Practice Management program provided information on the services that the LPM group has offered throughout the State to small firms. Due to the economy, the LPM is seeing more attorneys opening small and sole practices. The transition to Fastcase has been smoother than anticipated. There have been very few com paints about the change from Casemaker and almost no technical problems with the program. LPM has conducted hundreds of tailings on Fastcase, especially web based training, so far this year.

Finally, the committee had an informational session with Qual-Care, a program that manages self insurance programs for associations. These programs are referred to Multiple Employer Welfare Association or MEWA. If implemented, the Bar would create a board of trustees to administer a self insurance trust. The board would then review the risk of the members insured and set premiums and then retain an agency to administer claims maintain handle the list of qualified physicians. Qual-Care has experience in handling MEWAs such as the Georgia Home Builder's Association and the a group of physicians in New Jersey. The been fits of such a program is that by being a self-insurer, we cut out the shareholder profits and executive salaries and can offer insurance at lower costs. The committee will be investigating this option extensively.

Posted by Eric A. Ballinger at 7:38 AM No comments: 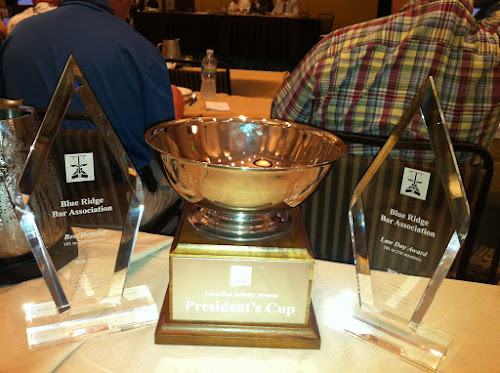 It is a proud moment for the Blue Ridge Judicial Circuit Bar Association at the Plenary Session of the Annual Meeting of the State Bar of Georgia. During the awards ceremony we picked up three trophies. First, the award for the Best Law Day program which our bar is a perennial recipient. Second, is the award for the Best Website which we are receiving for the first time. Third and ultimately, we received the President's Cup for the best all around local voluntary bar association in the State.

While I am proud to receive the acknowledgment and accolades for the accomplishments of the bar, credit must be given where credit is due. The people responsible for these awards are Will Carlen, Lara Schuster and John Early for their hard work on the Law Dy program this year. Taking on the Law Day Committee each year is a daunting task with the responsibility to uphold the legacy created by Law Day program chairs in the past. Further credit is due to Lara Schuster for her work forging a new path with our Bar website, http://brba.weebly.com

Furthermore, credit is due to President Paul Ghanouni and the entire membership of the Blue Ridge Bar Association. The hard work and contributions to the community of each an every member is recognized by the leaders of the State Bar of Georgia and brings great credit to our Bar. Thank you for making this a very proud annual meeting

Posted by Eric A. Ballinger at 7:24 AM No comments:

Of course, the annual meeting is not all work. This year's meeting is being held at the Kingston Shores in Myrtle Beach, South Carolina. tree will be plenty of time to hit the beach and attend some of the many social events that strengthen the camaraderie between the members of the bar and for families to have a good time.

Posted by Eric A. Ballinger at 7:43 AM No comments:

I just got in the mail my brochure for the State Bar Annual Meeting in a large brown envelope. The postage for that envelope was $1.22. The problem is that I downloaded the same brochure as a PDF just last week, with no postage cost to either the Bar or myself. There goes the better part of the $2.00 bar due increase for next year.

One of the issues the Board of Governors will need to tackle is the budget, or more precisely, the expenses. I am not going to say that the staff at the State Bar headquarters is wasteful. In fact, quite contrary. Last year the staff at the Bar Headquarters worked voluntarily worked hard to cut costs and came in substantially under budget. But there are are other ways to cut the costs of operations that will require the cooperation and support from the membership as well.

One area the Bar can cut costs is in communications. The Bar has a state of the art website, membership database and e-mail system. With the use of technology, the bar could cut costs in printing and mailing the many communications it sends out such as brochures, magazines and notices. Tis can eliminate thousands of dollars in costs and as evidenced by the costs just to mail one brochure, could eliminate the need for further bar dues increases.

Posted by Eric A. Ballinger at 8:49 AM No comments:

Email ThisBlogThis!Share to TwitterShare to FacebookShare to Pinterest
Labels: Board of Governors, budget, State Bar of Georgia

Fastcase for the Law Library by Eric Ballinger

David Cannon, Jr. is working to get Fastcase terminals located in the Cherokee County Law Library. As you may know, the Lexis and Westlaw terminal that we have are quite expensive and are a considerable drain on the law library's budget. In the past David attempted to work with Casemaker, the Bar's prior legal research provider and was met with a poor response.

In January of this year, the Bar began its contract with Fastcase as the legal research provider to the membership. Fast case is an improvement over Casemaker and rivals their more expensive competitors in the service provided.

David made contact with the representative at Fastcase and got an immediate response. They offered to allow the Law Library to have Fastcase terminals for $800 per year for the first terminal and $400 for each additional terminal. That is a great savings, but it gets better. The more counties that sign up to use Fastcase the more they will reduce the cost of the initial terminal, even as low as $500.

David presented this information at the end of the last Board of Governor's meeting and it was met with a good response from Bar leaders across the state, especially in those counties with very few funds to provide the materials for a law library as mandated by law.

Posted by Eric A. Ballinger at 9:24 AM No comments:

The Spring Meeting of the Board of Governors opened with the detailed explanation of the proposed two dollar increase for the 2011-2012. The simplified explanation for the dues increase is to prevent a larger increase in the near term future.

The facts are that the bar has operated with a surplus for the last four years, however the bar has also operated with a budget deficit for the past four years as well. The surplus comes from dues increases over the past years as well as increases in membership that resulted in a two million dollar surplus in 2007. However the Bar has been operating a deficit due to the recent economy. This is mainly due to a number of programs that were funded by the Georgia Bar Foundation from IOLTA funds as well as taking on a number of new programs. Some of these programs include the Military Legal Assistance Program, Law Related Education and Mock Trial. These expenses have increased the Bar's budget by eight hundred thousand dollars. The projections show that with no Bar dues increase, there would need to be a dues increase in five years of thirty dollars per member.

The projection of the finance committee is to increase dues by two dollars per member for the next five years would allow to spend down the surplus and gradually increase dues. While this board was not proposing the dues for the next five years, this proposal is a start on that "glide path" of Bar dues increase. This also takes into consideration that the Bar Center is now able to handle more tenants since it was paid off, to include the Prosecuting Attorneys Council and Public Defender's Standard and Training Council.

There was healthy debate. Some proposed to go ahead and make the incremental dues increase for the next five years. There was also debate, lead by David Cannon, Jr., that there should be no dues increase and the bar needs to look to eliminating some programs and reducing the budget. While the dues increase did pass by a majority, there will be more discussion on making budget cuts. If your would like to discuss this further, contact me, Eric Ballinger or David Cannon, Jr. to talk about the programs the bar has to offer and what ones you would not mind seeing cut.

In other business, there was a review of the 2011 Legislative session. This year is heralded the best year for the bar in the Legislature. The main highlight is the Legislature passing the new Evidence Code, but there were also other successes in changes to the Public Defender funding and insuring the our Courts are adequately funded for the next year. The Bar President and its legislative team maintains a regular presence at the Capitol each year to insure

President Tate also made presentations to the families of Judges Debra Bernes and John Ruffin for their service to the bench, bar and the community.

Posted by Eric A. Ballinger at 7:58 AM No comments: